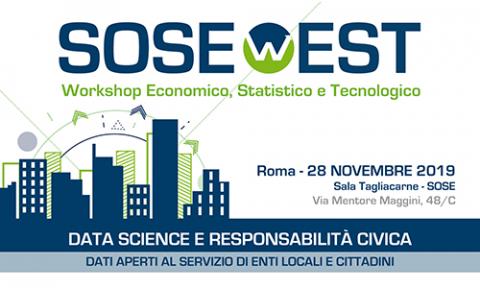 The second appointment of the year with SOSEWest2019, the Economic, Statistical and Technological Workshop, will be entirely dedicated to Data Science for public finance and will be held on November 28th at SOSE headquarters, in Via Mentore Maggini 48C.

The protagonist of the day is the debate between the members of the academic world and institutions on the role that data play as support for research activity and for political decision-making process. SOSE, with its institutional and research activity, participates in the debate as producer of data on one side and developer of models to analyse information on the other.

The first part of the workshop will focus on the role that standard expenditure needs database has had and may have in the future to support public administrators and researchers in the field of public finance, considering its diffusion which started in 2014 with the web portal OpenCivitas.it, that, in May 2019, saw the sixth release. The second part will give a more general view of data as a basis for economy and public finance research activity.

The workshop will begin at 9.15 am and will be introduced by the CEO of SOSE, Prof. Vincenzo Atella and moderated by Prof. Leonzio Rizzo, from the University of Ferrara, Prof. Fabio Fiorillo (Università politecnica delle Marche), Prof. Emanuele Padovani (University of Bologna), Prof. Alberto Zanardi (Parliamentary Budget Office), Prof. Massimo Bordignon (Università Cattolica del Sacro Cuore) and Prof. Michela Redoano (University of Warwick) will take part to the debate.